After being flooded with emails after yesterday's post, I quickly realized that I did not provide enough explanation about the Walmart trellis bedding/curtain situation. I've tried to answer all of your questions here, but let me know if I've left anything out. 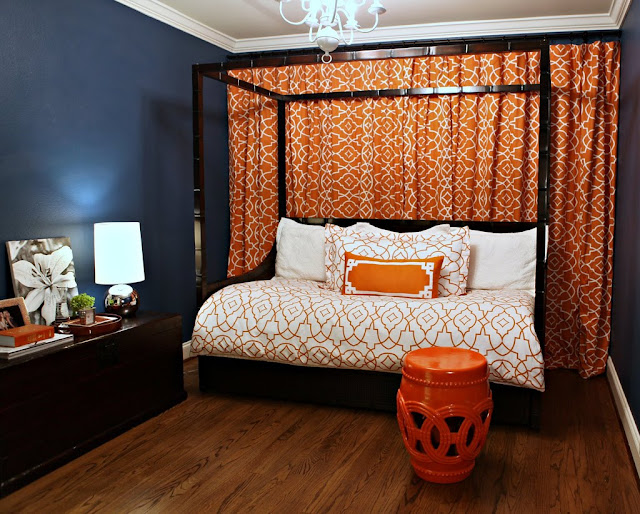 Let's start at the beginning...about a year ago, I ran across the bedding on Pronto Home and immediately clicked through the link because I'm obsessed with anything orange and I also loved the trellis print. It was shocking to me that Walmart had such au courant home decor, and it was even more shocking to see the price tag - $25 for a twin duvet and sham. Seriously?!? That price is unreal...even IKEA bedding is more expensive (I think). I'm not going to lie...I absolutely hate Walmart so the idea of buying bed linens from there was not appealing, no matter how good the deal was. 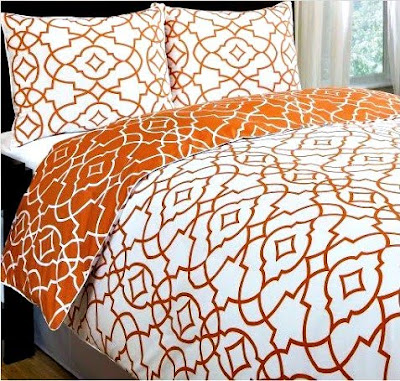 The black colorway is nice too. 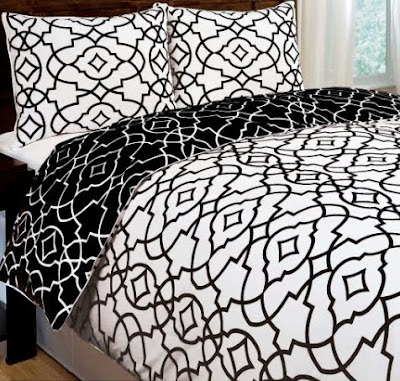 Despite my distaste for the retailer, I decided to bite the bullet and give the set a try since a) it was dirt cheap b) it was for a bed that wouldn't get much use and c) it could be returned if it was terrible. I begrudgingly chose the "Site to Store" shipping option since that was free and having it shipped to my house would've cost almost as much as the merchandise. Luckily my trip to the dreaded store turned out to be fruitful and I was glad to discover that the print was in the perfect color and the fabric seemed to be of decent quality when I picked it up in the oh-so-lovely customer service area. 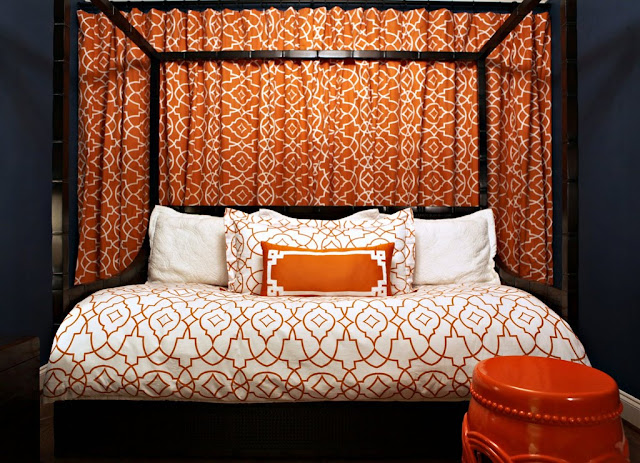 I liked the print so much that I bought two more sets when I got home. In the room, I had planned to cover the back wall with curtains. The main reason being that there is only one window and it's offset to right...the boxy canopy frame of the daybed and the window clashed in terms of symmetry. Plus, that window doesn't let much light in due to the dense trees on the exterior so I wasn't sacrificing much by covering it.
Anyhow, I ordered the king size duvet sets so that I could make curtains from the fabric. As it turned out, I didn't really "make" curtains...I actually just attached clip-on curtain rings and strung them on a rod. I literally put the duvets up there as is...no cutting or seaming. Normally I wouldn't do that, but it looked good and this wasn't a room that I wanted to fuss with much. If you try this, just make sure to steam or press the fabric and evenly space the rings so it looks at sharp as possible.
On the quality factor, I'm pretty pleased (especially for a $25 investment). The fabric isn't stiff or uncomfortable and shockingly, the seams and buttons are all fine. After washing it, the color did run, but it has since come out after soaking it in some colorsafe bleach. If you buy the set, my advice is to soak it in vinegar prior to washing since that should set the colors.
Also, on another note, the trundle daybed was purchased last summer from Z Gallerie. Unfortunately they no longer carry it and I haven't seen a similar option. If I do...I'll be sure to post the information.


Hope that helps! Sorry I left you hanging yesterday :) 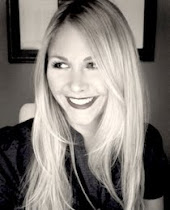